Yours truly appears this week in computer magazine Arvutimaailm [Estonian] and in the technology insert of newspaper Eesti Ekspress [Estonian], in feature articles about the Linutop. Both articles are signed by Elver Loho of the IT-Neeger team.

Daniel Jacobowitz writes about problems he's having getting proper ALSA support for his desktop computer. Boy, does that sound familiar!

I myself have three computers that are partially or totally unsupported on ALSA:

As we can see, there's plenty of ALSA support remaining to be coded, ported or cleaned up, and some people are willing to pay for the results. Who's gonna grab it?

Linutop - Internet for the masses

I promised last week that I would be telling more on October 1st, about the mysterious Project X that I had been sporadically blogging about over the last few months. Better late than never, so here's the story:

I met Morocco-based French entrepreneur Laurent Bervas via his blog in January 2006, while looking for countries nearby EU with a promising ICT market, because of growing obstacles in getting work in my field, due to my not being an EU national.

By the time the situation had reached the ridiculous extreme that friends were continuously loosing juicy recruitment bonuses, simply because their employer's HR department had issues with hiring non-EU nationals — despite EU policies that clearly favor foreigners married to an EU national — I figured that I ought to do something creative and see which of the countries bordering with EU might offer interesting opportunities.

Laurent was blogging about all the exciting opportunities he kept on seeing, since he relocated to Morocco to conquer the high-end Real Estate market. One day, he wrote about Morocco becoming a rising figure in the outsourcing business for the Francophone market, which prompted me to contact him. After a couple of weeks of discussion, he cautiously dropped his idea for a niche market he had spotted: a simple Linux-based set top box to surf the Internet. He then asked if I would be interested in developing it and in launching a startup with him to promote it. I gladly accepted.

That's when Laurent decided to introduce me to an old friend of his, Frédéric Baille, who spent several years at Compaq, culminating with a role in the team that launched the iPaq. Fred's help was instrumental in defining the market positioning of our product.

Laurent and I discussed the product features at length over IM and immediately agreed that the OS would be based on Free Software. That left the hardware part unresolved... or so did Laurent think.

Years ago, I briefly worked in the management team of an Estonian data security startup. This gave me the opportunity to network with several movers and shakers of the Estonian ICT. Among them was a promising ASIC and industrial design startup that produced really cool Thin Client hardware. The answer to our hardware needs, I figured, could easily be fulfilled by them.

My idea of contracting the hardware to Estonia was initially received with skepticism, so I made a simple proposal: why don't we hold the inception meeting in Tallinn and meet with the potential hardware supplier at the same time? Fred and Laurent accepted, so we spent part of April 2006 there, with me acting both as their friendly tourist guide and as the middleman for the introductions.

Fred and Laurent immediately fell in love with Tallinn's designer bars, omnipresent WiFi network and blond-a-plenty. Most of all, their visit at our potential hardware supplier gave them the answers they needed: Estonia is IT.

The hardware we selected is built around the AMD Geode LX, a nifty Pentium-compatible single-chip computer. It comes equipped with VGA output and four USB 2.0 ports, along with high-quality audio via 1/8" input and output jacks, plus a built-in encryption engine. We added 100baseT Ethernet connectivity (with provision for other networking options) to that, to complete the platform.

For the software part, we used ingredients from Debian's Etch release, focusing on a configuration that would enable easy access to the most popular applications for home and small business use: Instant Messenger (Gaim), Multimedia player (Totem), PDF reader (Evince), Web browser (Firefox), word processor (AbiWord).

The result is this: 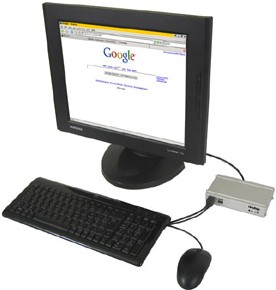 The editorial team at IT-Neeger (an A-level Estonian ICT blog) immediately scooped the story [in Estonian] and it produced such a strong response that the traditional Estonian media contacted the IT-Neeger team to write a feature article (stay tuned for details). The local Slashdot, Minut.EE, also reported [in Estonian] on the IT-Neeger article.

Thus, myself and Laurent Bervas spent the better part of this week being blogged, interviewed and podcasted by a variety of Estonian and French publications, which is how I only got around blogging this bit tonight.

Contrary to our competitors, we fully intend on keeping this platform open, so our initial market will actually be Free Software developers with a penchant for innovation. As such, our first 50 units are exclusively intended for interested developers who want to improve upon our initial idea and participate in defining the final product. Inquiries are welcome!