While looking at outstanding bugs against my Debian packages, I noticed that an RC bug had crept in against Planner. The bug itself isn't new. In fact, Ubuntu had experienced it already and simply decided to build their package without SQL support to resolve the issue.

Planner is a fairly well-matured piece of software, with very few bugs remaining. It remains quite usable in everyday use. However, it has fallen behind in terms of keeping its code up-to-date against the latest versions of some optional dependencies.

Tonight, I was just sitting here pondering what to do and it occurred to me that I'm simply no longer interested in maintaining the package. I have done a fairly good job of overhauling the build scripts and of upgrading them for the Python transition but, at this stage, I feel that I've accomplished as much as I could do. Besides, I no longer have the time to maintain so many packages, so I have decided to focus on maintaining those I actually care for and Planner isn't one of them.

The package already is assigned to Debian's GNOME team, so no need to actually orphan it, since anyone from the team can pick it up. If you're a member of the GNOME team and feel like taking over, perhaps even submitting patches to upstream to close a few more bugs, go right ahead and jump in.

Thursday evening, I joined the inhabitants of the twin town of Valga-Valka, sitting smack on the Estonian-Latvian border, to celebrate their entry into the Schengen treaty. Ever since I first crossed the border there on a roadtrip from Tallinn to Fallingbostel, in year 2001, I knew I would have to return and, sure enough, I briefly passed through during last summer with an Estonian friend, on our way to an acquaintance's birthday party.

Still, that told me nothing of the town's life and left me wanting for more.

Upon hearing that year 2004 EU accession countries would join Schengen in December 2007, I immediately promised myself to show up and join the crowd. As it turns out, I missed Aleks Tapinš of the All About Latvia blog by very little, having I caught his last-minute e-mail the next afternoon. Aleks blogged a great article depicting the Latvian side of life and providing some background info on the town, if you're curious.

I arrived late-evening on Thursday via the Tallinn-Viljandi-Valga bus and checked into my hotel, then proceeded to checkpoint Valga II around 23:30, with the intention of grabbing a drink on the Latvian side and returning just before midnight for the celebrations. Hardly anyone was in sight, except for Latvian officer Čabana who was completing the inspection of a Russian car with three noisy passengers. Upon presenting her with my passport, officer Čabana cheerfully lead me to the office and slid my passport through a slot to officer Bukss, who was visibly surprised to have any tourist show up on the last day of his job to get their passport stamped. Upon explaining to him the reasons for my presence, he pointed me to a nearby bar where I could have a drink, visibly amused by the situation. 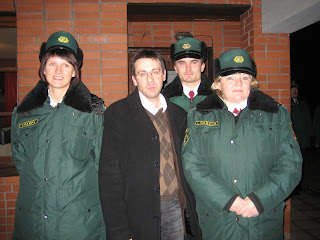 I spent the next few minutes in a local casino in the company of three hilarious Latvian truck drivers, Zintars and Aivars, two Latvians with limited English language skills and Yuri, an ethnic Russian living in Ireland who was born stateless on the Latvian side of the town and who later acquired Estonian citizenship by claiming ancestral land on the Estonian side.

Upon returning to the border, just minutes before midnight, I found myself in the middle of a huge crowd of villagers, police officers, border guards and politicians from both countries - barely getting noticed by anyone. I handed my passport to an Estonian border guard who emotionally commented to a civilian friend of his nearby that, "Wow! That was the last one!", handing me my passport back just as the midnight bells rang and the mayor of the Estonian side started his speech amidst pyrotechnics lining the road. 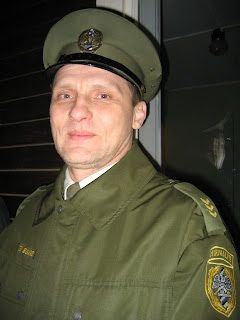 I then had a chance to chat with the Estonian mayor, who promptly handed me a bilingual certificate, signed by the mayors of both towns, attesting that I was the first to cross the open border, while introducing me to his two young daughters with whom he was about to take a stroll on the Latvian side.

The next morning, an even bigger and more symbolic event took place: the demolition of the fence that had been cutting the Sõprus/Raiņa street in half. You can see a picture of what the street looked like before on Aleks' blog article [edit: or on Jens-Olaf's blog article]. After the fence was removed, it instead looked like this: 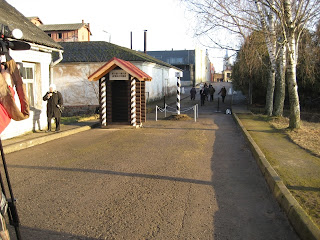 The crowd then proceeded to checkpoint Valga III, where a stage had been setup for the politicians to make their speeches. An interesting fact is that, because of the way the border was drawn, along a creek leading to Pedeli river, an Estonian main road was technically on the Latvian border and thus aptly named "Raja" (border) street. The Estonian mayor commented in his speech that the the brand new supermarket standing behind us was also technically on borderland and could not have possibly been built earlier, weren't it for the Schengen treaty matter-of-factedly eliminating borders between participating EU countries. The speeches were closed by a youth group whose choreography featured six break-dancing boys, dressed as Estonian and Latvian border guards and as border posts. The choreography ended with the teenage border guards carrying away the human posts on their shoulders, just as a choir of young girls replaced them with songs in either languages.

Before catching my bus back to Tallinn, I dropped by the Valga tourist info, only to face a nervous-looking Kapo officer in plain clothes. Upon mumbling something about the tourist info and wanting to grab maps, I noticed that a press conference was taking place behind. As he finally let me pass to the tourist info side of the building, a familiar voice said to me, "Hey! Weren't you at our place last summer with Martin Ranna?" Yup, the wife of the acquaintance whose birthday party I had attended last summer is working there and greeted with me refreshments and munchies she had cooked in prevision for the presidential visit! As was my luck, she had one of the commemorative plaques that had been given to the politicians at Valga III on hand: 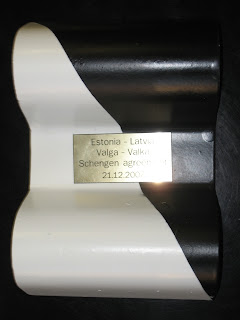 I was glad to see the town becoming one again, even though it is ethnically divided. There are already signs of people on both sides learning one another's languages and shopping on either side of town, not to mention plans of merging the municipal bus operations of the Estonian and Latvian halves of the town, so I'm sure that they'll get there in due course.

For me, Schengen brought a much more practical and quite welcome change: the end of messy border crossing stamps that were rapidly filling my almost new passport, every time I visited the head office of our company in Tallinn. While Estonian border guards mostly stamp passports in an orderly fashion, being careful to fit exactly 8 stamps in a single page and to put entry and exit stamps side-by-side, Finnish border guards apparently are incapable of doing so, instead systematically wasting pages by either stamping sloppily in a way that makes it impossible for more than 4 stamps to appear on a given page or by flipping to a brand new page, every time I had to cross the border.

In case anyone ever wondered why I'm currently representing Estonian interests abroad, despite living in Finland, this example is one of the many reasons: Finnish authorities routinely display arrogant carelessness towards the population and doubly so towards immigrants. It amounts to an accumulation of idiocy that has costly consequences on people's lives. For some, it's about being denied the public institutions' support when they need it the most and their life forever going downhill thereafter. For me, it has been about countless missed opportunities (jobs, love affairs, travel plans), plus very costly passport and residence permit renewals. Given this, I simply don't see myself ever representing Finnish interests ever again. Faith no more. Besides, the Estonians are fun and easy-going people. Siski ma mõtlen, kas ma peaksen nüüd Eestisse kolima või?

As my aging ThinkPad is starting to show signs of an impeding retirement, I recently began looking for a newer laptop to replace it. My current choice would be for an LG Electronics model E200-A.CPPPV laptop. However, when trying an Ubuntu Feisty live CD on it, X failed to find any usable screen resolution and aborted. Thus I was wondering if anybody had better results using a Gutsy CD? In principle, the hardware should be supported, since it's all Intel and ATI components but, these days, you never know, especially with graphic and wireless chipsets. Comments?